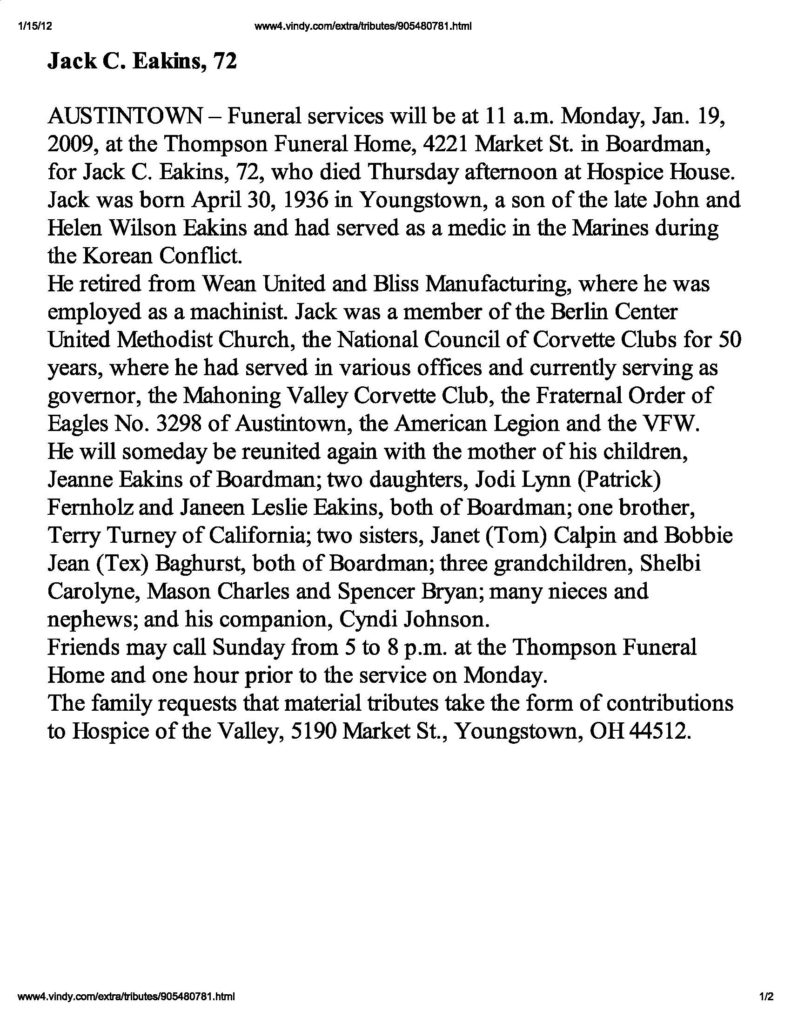 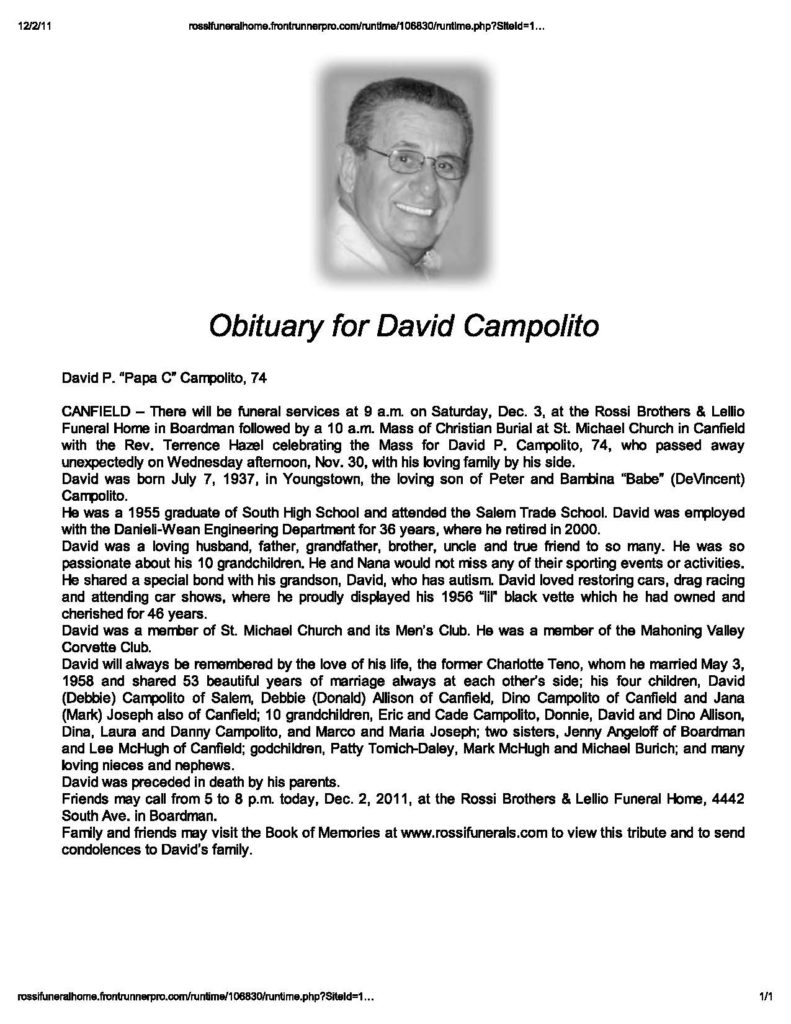 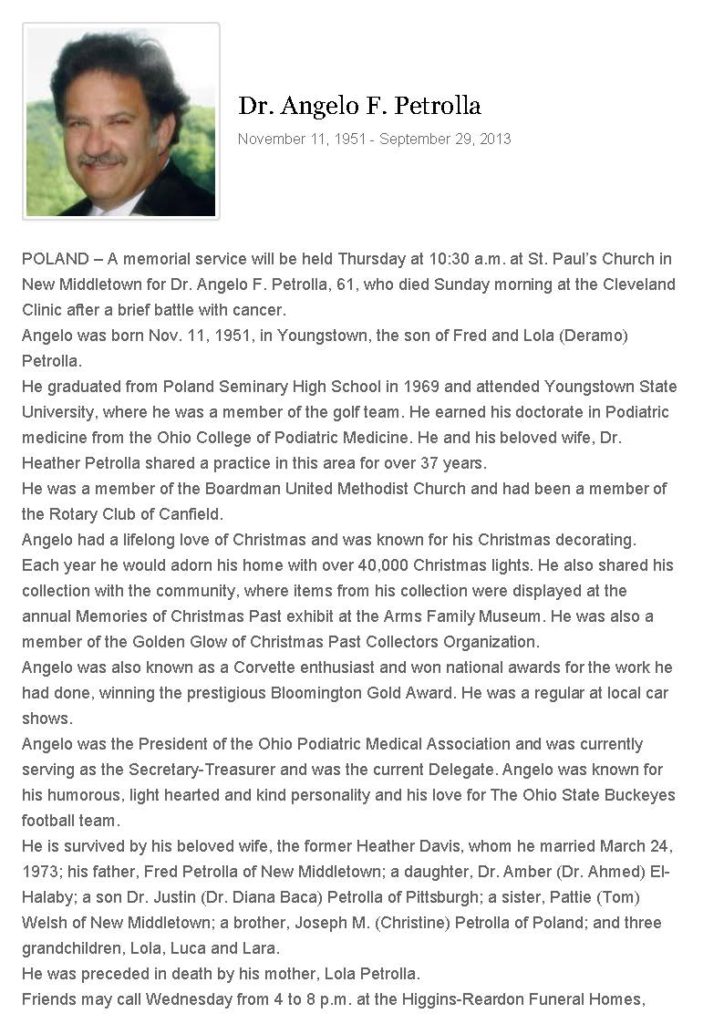 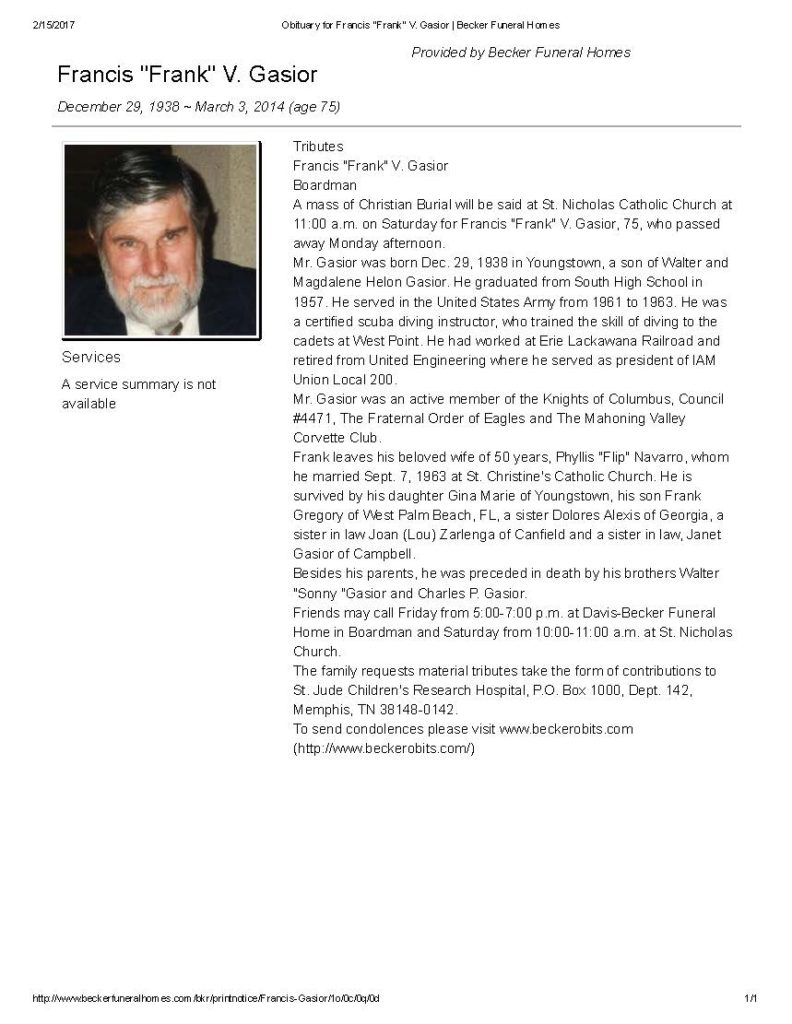 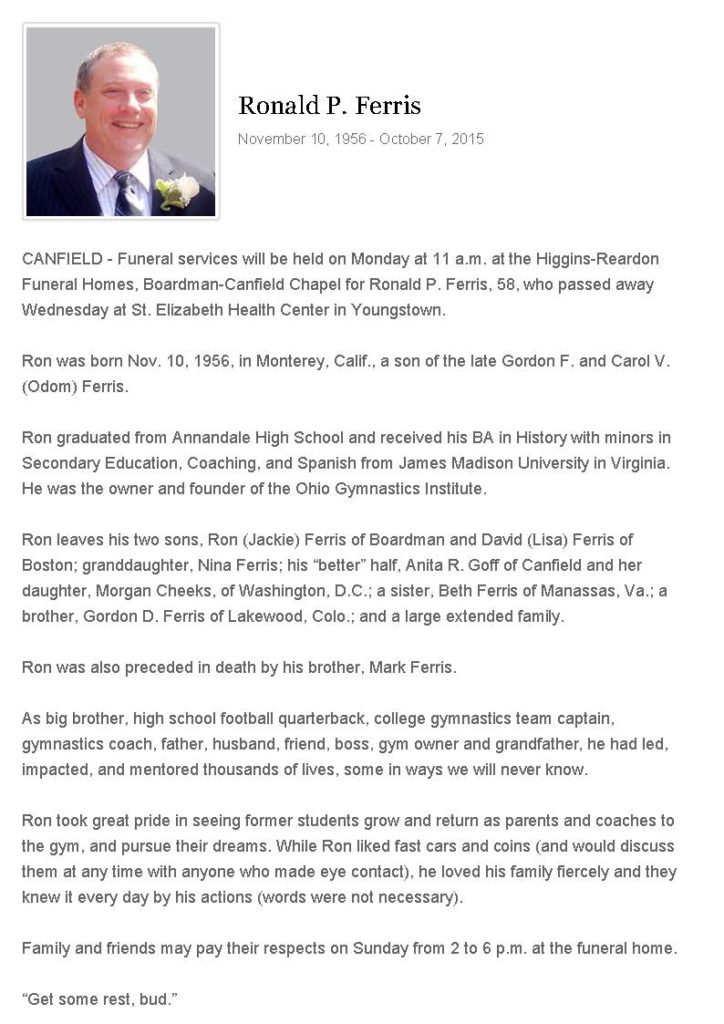 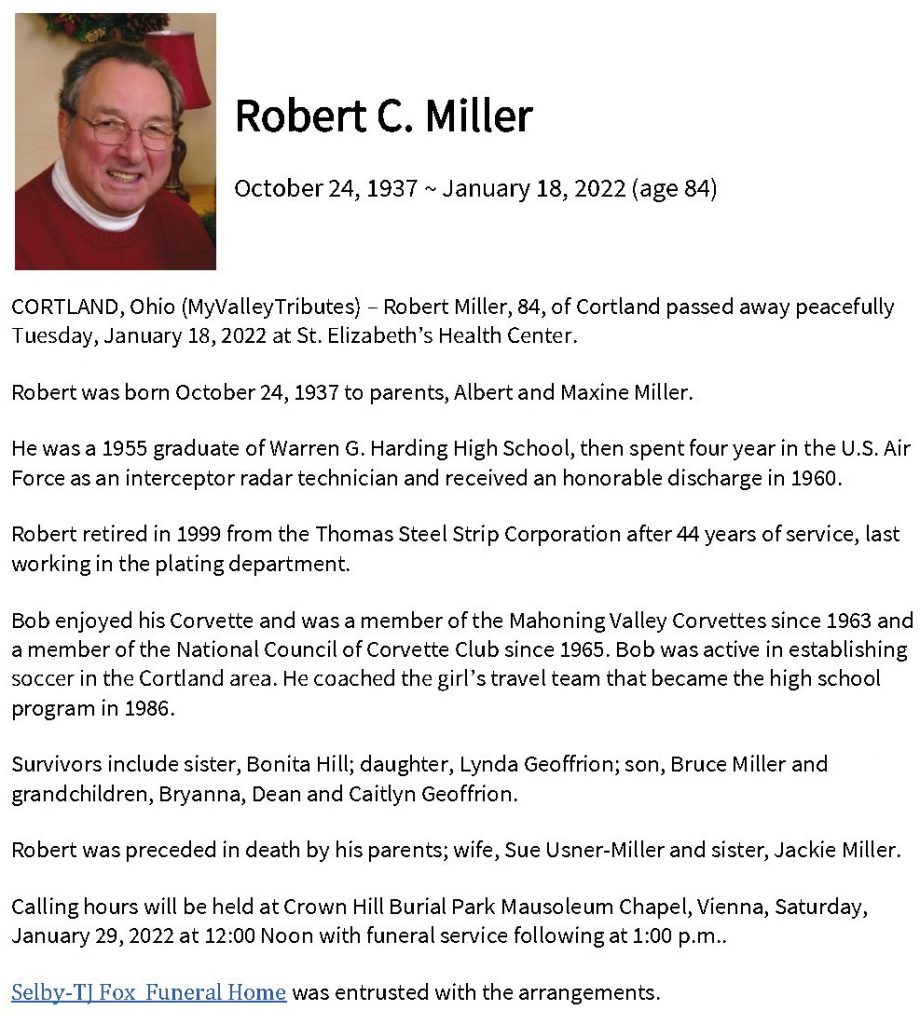 William Bazil Davis of Boardman, Ohio passed away peacefully in his home on Thursday, November 11, 2021, after a short battle with cancer.

Bill was born to Bazil R. and Lavina Harris Davis on October 16, 1946. A 1964 graduate of Woodrow Wilson High School, he went on to attend Youngstown State University before working at Youngstown Sheet and Tube. Bill enlisted in the United States Air Force in 1965 as an Airman First Class and served as a radio operator in Vietnam from June of 1967 to June of 1968. He was stationed in Elkhorn, NE when he met Patricia Renze. They were married on September 7, 1968. Born to that union were Michelle, Erich, and Elizabeth.

Bill began his career in law enforcement with the Fremont Police Department before eventually serving as Chief Deputy Sheriff in Dodge County, NE. He attended the 101st session of the FBI National Academy. Bill eventually resettled in Youngstown, OH. He reunited with high school sweetheart, Elizabeth Evans Gillam. They were married on July 6, 1991. Bill was a dispatcher with the Boardman Police Department and enjoyed special relationships with his Boardman Police family.

Bill will always be remembered for his contagious laugh, his love of Corvettes, classic cars, and ham radio, operating as K8TUS. For more than 44 years, he sat in Turn 1 at the Indy 500 and enjoyed numerous race traditions with multiple generations of race fans. A gifted storyteller, Bill had a bright and charismatic personality. He enjoyed his car buddies, ham radio friends, and 1964 Wilson High classmates. Bill never met a stranger and dearly loved all of his people.
He is preceded in death by his parents; in-laws, Robert L. and Rose Marie Evans; sisters, Mary (Tom) Wills, Jane (Jack) Ball; a brother, Harry (Betty) Davis; his beloved daughter and son-in-law, Elizabeth and Chris Vandersnick; niece, Leslie Farrand; and nephews, James Ball and Robert Wills.

Bill is survived by his loving wife, Elizabeth; children, Michelle (Robert) Kerr of Hastings, NE and Erich (Jill) Davis of Treynor, IA; stepchildren, Russell (Elizabeth) Gillam of Boardman, Chris (Jenny) Gilliam of Austintown, and Elizabeth (Steve) Gardner of Pittsburgh, PA. He also cherished his grandchildren, Emily (Cody) Lira of Omaha, NE; Ethan (Sydney) Kerr of Omaha, NE, Thomas and Abigail Kerr of Hastings, NE; Michael Davis of Treynor IA; Bobby Gillam of Austintown; great-granddaughter Blakely Kerr of Omaha; and a number of nieces and nephews who treasured their “UB.”
Visitation will be on Monday, November 15th from 4:00-8:00 p.m. at the Davis-Becker Funeral Home in Boardman. A funeral service, also at the funeral home, will be held on Tuesday, November 16 at 11:00 a.m. followed by interment at Forest Lawn Memorial Park.

YOUNGSTOWN, Ohio (MyValleyTributes) – Robert “Bo” Melewski, 70, of Youngstown, Ohio, passed away peacefully at his home on Sunday, February 20, 2022, surrounded by his closest family.

Bo was born on March 17, 1951, to the late Stanley and Mary Melewski in Youngstown, Ohio.

After graduating from South High School in 1969 he worked in the steel mills for 36 years as a locomotive and tractor mechanic.

In 1973 he married Sandra (Sauceman) and went on to have three children, Michael, Brian and Dennis.

After retirement Bo spent his time working on motorcycles, tractors and anything with an engine.

He was a long-time member of the Mahoning Valley Corvette club.

His best days were those he spent with his six grandchildren, who knew him as “Papa”.

Interment will be private at Lake Park Cemetery.

Donald was born March 29, 1945, in Wisconsin Rapids, Wis., a son of the late Wayne and Betty Grosklaus Truitt and came to this area six years ago.

Donald grew up in Wisconsin, spending most of his life in Wisconsin and Connecticut. He received his associate degree in credit management from the Wausau Technical Institute in Wisconsin. He worked as a mortgage credit loan manager for 21 years at Sikorsky Financial Credit Union, retiring in 2006.

He was a proud veteran of the U.S. Army, having served during the Vietnam War. Donald was very active with Disabled American Veterans, Austintown Chapter, where he had served as trustee.

He enjoyed keeping busy and doing latch-hook rugs. He also loved his Corvette and was a member of the Mahoning Valley Corvettes and the Club Corvette of Connecticut.

Most importantly, Donald enjoyed spending time with his family and spoiling his grandchildren. He will be dearly missed.

He leaves his wife, the former Carol Ann Howell, whom he married July 27, 1991; his daughter, Julie Truitt of Sun Prairie, Wis.; his son, James Truitt of Boston; and three grandchildren, Connor, Kaitlyn and AJ.

Donald also leaves his former wife and her husband, Linda and Paul Lindner, and their son, Paul E. Lindner; a sister-in-law, Barb Truitt of Savannah, Ill.; and his beloved dog, Woody.

Besides his parents, Donald was preceded in death by a brother, Larry Truitt.

Friends and family may view this obituary and give their condolences at www.lanefuneralhomes.com.